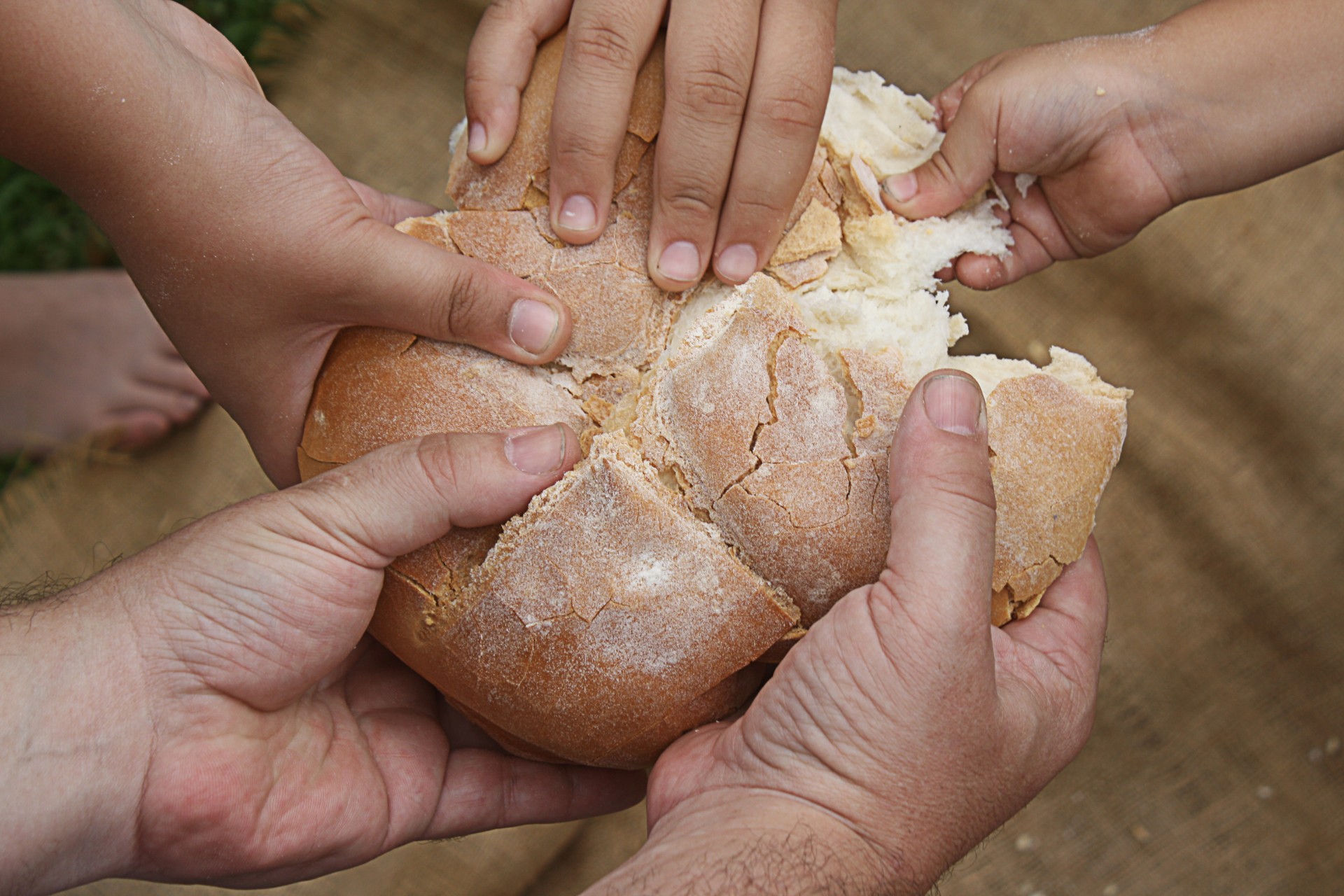 World Daily Bread has ONE purpose in all its mission activities – to deliver every child, woman, and man, wherever e may be, who is in extreme suffering. This sole purpose has a threefold mission. First, to provide daily physical bread to hungry people in every nation, starting with orphans and widows. Then, to rescue every family on earth who is in acute distress, and then provide them with lifelong basic sustenance. And after bread and sustenance are provided to those in desperate need of them, to give children who have been bereft of love and affection, love and affection in abundance.

It is, of course, a humanly impossible mission. But what is impossible with man is possible with God. This mission, therefore, seeks all its resources, strength, encouragement, and guidance absolutely from the Sustainer of the Universe, trusting that all that Omnipotence can do through this organization will be done.

Bread is already available for every hungry person on earth

A most astonishing truth is that there is already enough food in the world to feed every hungry person on earth.

The United Nations asks and answers the most vital question on earth today: ‘Can the world feed itself? The short answer is: “Yes”.   un.org

The world produces enough food to feed everyone. World agriculture produces 17 percent more calories per person today than it did 30 years ago, despite a 70 percent population increase. This is enough to provide everyone in the world with at least 2,720 kilocalories per person per day.   worldhunger.org

Both of the world’s leading authorities on food distribution (the United Nations Food and Agriculture Organization [FAO] and the World Food Programme) are very clear: there is more than enough food for everyone on the planet. The FAO neatly summarizes the problem of starvation, saying that “the world currently produces enough food for everybody, but many people do not have access to it.”   overpopulationisamyth.com

The food crisis appeared to explode overnight, reinforcing fears that there are just too many people in the world. But according to the FAO, with record grain harvests in 2007, there is more than enough food in the world to feed everyone – at least 1.5 times current demand. In fact, over the last 20 years, food production has risen steadily at over 2.0 percent a year, while the rate of population growth has dropped to 1.14 percent a year. Population is not outstripping food supply.   Eric Holt-Giménez and Loren Peabody – Food First

What the world produces today is not only sufficient to stave off starvation anywhere on earth, but suffices to provide all the nutrition for a healthy life.

There is enough food in the world today for everyone to have the nourishment necessary for a healthy and productive life.’   World Food Programme – wfp.org

This is the greatest tragedy on earth. As the United Nations admits, ‘It is the greatest scandal of our age’. Future history will record with astonishment that ours was probably the only era in history that produced enough food to provide every man and woman and child on earth all the food they need to live a healthy life, and ours was also the era in which the most number of people starved to death.

If we could harness the resources wasted on the pursuit of profit – including the wars that our government funds around the globe – we could feed the world many times over.

The unspeakable tragedy of starving children

There is no tragedy greater than the horror of little children literally starving to death because there is nobody to feed them a few morsels of bread. The photo of a toddler, crouched in the final pangs of starvation, and waiting to be devoured by a vulture that has sensed his impending death, was so shocking that it moved the whole world.

Yet this was only one image. Similar images in other circumstances – of children screaming in unbearable pain of hunger – go unnoticed and unknown to the rest of the world. I wish everyone could hear the groans of starving children and their pleas for a mouthful of food, as I have heard in my travels to countries where innumerable kids in each city go to sleep every night on hungry stomachs. Just to cite one encounter of the uncountable many I have had, I was on my way to board a train in a small city. As I passed by the entrance to the station, I heard the loud wailings of a child, and turning to look, saw a 6- or 7-year-old child lying on his mother’s lap. She was sitting on the pavement of the entrance. I stopped and went over to them, and asked the mother why the child was crying.

‘He is asking for food’, the mother said, with a smile of hopelessness.

Normally, in such situations in the past, I had purchased food and handed it to the hungry ones, instead of giving them money. But I had to catch my train, and I gave the mother some money enough to buy food for both. I did the best I could in my jobless situation in those days, but the memory of this encounter still grieves me, 30 years later, and whenever the image of the wailing child comes to mind, I wonder if the mother was able to feed her child with daily bread until he was old enough to get his own food.

I have had too many such heart-excruciating encounters, and these experiences have given me an acute awareness of the real state of this world’s afflicted ones, and a great longing to do something about it. This mission is a result of that great desire to do something to bring daily bread to the hopeless hungry people of the world.

If all the nations in the world had joined hands to fight global hunger, I would not have heard the wailing of a starving child in any of my travels. There would have been no Pulitzer Prize-winning photograph of a dying toddler with a waiting vulture in the background. Because, if all the leaders in the world put their heart to it, they can have food to feed the world’s entire population one and a half times over!

If you are in a position of influence in your work or community, there is much you can personally do to alleviate suffering in this world. At the end of your life, what indeed can give you a greater sense of achievement than the realization that by your decisions you have helped deliver many orphans, many widows, and many other afflicted people from their desperation and hopelessness.

You, who have been brought to this website, by chance or by providence, can save many lives from starvation and from other kinds of extreme suffering. No, this mission does not seek your financial support or any other material pledge. What we seek is your fervent willingness to help the acutely afflicted people of this world with your own mission of compassion – when that opportunity comes to you. And that opportunity will surely come one day if you don’t let go of your compassion and your vision to provide bread and love to people in agony wherever your heart goes out to them.

This website is set up to inspire you to the greatest decisions of your life for the benefit of a suffering humanity worldwide.

Close to a billion people – one-eighth of the world’s population – still live in hunger. Each year 2 million children die through malnutrition. This is happening at a time when doctors in Britain are warning of the spread of obesity. We are eating too much while others starve.

There are people in the world so hungry, that God cannot appear to them except in the form of bread.

In the Lord’s Prayer, the first petition is for daily bread. No one can worship God or love his neighbor on an empty stomach.